As most of us are aware, the labour market is under severe pressure and technicians are an incredibly scarce commodity. But refugees with residence permits and diplomas are helping Heijmans out of a tight spot. We talked with Cheikhou and Zaher and their buddies Har and Hewar.

Whether you’re from Senegal, Syria or the Netherlands: 1 + 1 = 2. That was also sum quickly arrived at by training organisation Temphory and the Dutch Foundation for Refugee Students, UAF. These two organisations saw the huge demand for Dutch workers, but also plenty of non-western workers keen to find a job. The two organisations put one and one together and set up a professional training course (Beroeps Begeleiding Leerweg – BBL) for residence permit holders: a training course for technicians for low and medium-voltage distribution or electro-technical installations at MBO 3 level (secondary vocational education). And to prevent any short circuits in communication, the participants also were also given extra Dutch language lessons. Heijmans, which has been closely involved in this combined learning and work experience project, is offering a number of internships, plus job guarantees to successful students.

So how did this work out in practice? We visited Maastricht, where Heijmans is currently transforming the former Dagblad De Limburger newspaper building. The old transport and press hall is being turned into learning spaces, laboratories and workspaces for Maastricht University. But first a cup of coffee.

In the Heijmans yellow hut, electrician Cheikhou Sow (32) from Senegal hands out steaming cups of coffee. He’s been working at Heijmans since April 2021, following an internship at the company.

Beyond the Three Country Point

His colleague Har Willigers (58) kicks off. He tells us how he saw a call for buddies on the Heijmans intranet. They were looking for people who were willing provide support for residence permit holders doing internships at Heijmans. Har didn’t hesitate for a moment. He is a Tenders project leader at Heijmans Infra in Rosmalen, but also a real bridge builder in the social sense. “Why I put myself forward? Any understanding for other cultures is fast disappearing in the Netherlands, while egoism is on the rise. That’s not my world. I want to learn from other cultures.”

Har, who grew up in Limburg, was still a boy when he discovered that the world didn’t end at the Three Country Point (where the Dutch border meets those of Germany and Belgium, in Limburg). In the late 50s, his uncle, who was a priest, left for Uganda, where he became a progressive bishop. So Har got to listen to lots of African stories at the kitchen table. In 2011, he also visited his uncle and spent ten unforgettable days travelling around Uganda and seeing how people lived there.

Har has been Cheikhou’s buddy since April 2021. His African colleague is from Tambacounda, a Senegalese city with 70,000 inhabitants. It’s not a conflict area, but Cheikhou’s reason for fleeing the country – which is confidential – was urgent and convincing enough for the Dutch Immigration and Naturalisation Service (IND). Cheikhou has been living in a small apartment in the centre of Valkenburg since 2018, after spells in Roermond and Amsterdam. He admits he does sometimes miss the liveliness of the Dutch capital. “People are more open in the big city. They don’t see foreigners as strange,” he says in almost perfect Dutch, thanks to lots of language lessons.

When Cheikhou arrived in the Netherlands in 2015 he had very little luggage. One of his most valuable possessions: his electro-technical skills. In Senegal, thanks to a friend whose father worked at a power company, he became well acquainted with the world of kilowatts, kinks and cables. So Cheikhou was more than happy to take the CAP and BEP vocational training courses. But Africa is not Europe. This is the world of the SCC health and safety checklist, the NEN 3140 norm for low-voltage installations and CE quality labels for materials. Cheikhou: “In Senegal, we mostly worked with stuff from China and Nigeria. Less reliable. Safety is also not so important there.”

Cheikhou’s electro-technical expertise is now much improved. Based in Heijmans’ Geleen operation, Cheikhou has worked on a number of projects, including the Maastricht town hall and now on his current project: “I do everything. Pull cables, fit three-phase fuse boxes, distribution boxes, WLAN.” His colleagues say he is a pleasure to work with. And his enthusiasm is infectious. He does suffer occasional bouts of homesickness and sometimes calls one of his sisters back in Senegal. But a menu with thiebou-djien, a Senegalese fish dish? No, they’re very rare in the land of flans.

Both men are short and sweet on the buddy system. It’s a pleasure and not at all time consuming, stresses Har: “We’ve met each other twice. Cheikhou is self-sufficient. But he still thinks it’s great that he can talk to someone about subjects other than Heijmans. In the late summer of last year, they went on a trip together to Brussels, the city of a hundred and one cultures.

A different style of working

We then travelled from Maastricht to Rotterdam, where the yellow Heijmans flags seem to have become an integral part of the cityscape. And will remain so in the years ahead: Heijmans will be involved in the large-scale renovation and refurbishment of the Museum Boijmans van Beuningen until 2026. And the renovation was long past due, as the complex is chockfull of asbestos, is outdated and is screaming out to be made more sustainable. For the time being, Heijmans has plenty of work to do on the installation of fire suppression systems.

One of the technicians involved is Zaher Alahmad (43). In 2014, he fled the Syrian capital Damascus, which was being torn apart by war. He left his family behind. But also two graves: government forces killed his father and brother. In the end, his mother, brother and sisters all fled the Assad regime and now live in Germany and Sweden.

In Syria, Zaher studied Human Resource Management (HRM). He worked for three years at a television factory as a human resources manager. Technology appeals to him. After his electro-technical training in Ermelo and an internship – like Cheikhou – he joined Heijmans in April 2021. Zaher: “The style of working is really different than in Syria. Here, you work with safety rules. Lots of small companies in Syria don’t have safety equipment, because they want to save costs.”

Until 2014, Zaher knew very little about the Netherlands. Smiling: “Windmills, cheese, Van Basten and Kluivert.” Now he associates the country with both freedom and access detection. “And he’s doing well”, someone in the hut calls out. It is the voice of Hendrie Oerlemans, chief foreman for S&O projects at Heijmans Rotterdam: “Zaher can work independently and knows what safety is.”

As an electrician, Zaher is also well aware of the importance of networking. And not just digitally, but also socially. On that front, he’s found the right man in his buddy Hewar Marif (32). Hewar is a Quality and Safety coordinator at Heijmans. He was born in Sulaimaniyah in the Kurdish region of Northern Iraq. His parents fled the city when war broke out in 1995. First briefly to Iran and then to the Netherlands. Hewar: “I was six at the time. I grew up here, this is my country. But it’s easy for me to understand Zaher’s situation. I think helping newcomers is a great initiative on Heijmans’ part.”

Zaher and Hewar first met each other at ESA Estec in Noordwijk, where Heijmans is a familiar presence. Hewar: “So far, being a buddy is mostly about talking. And that’s useful, because Zaher is making real progress on the language front. As for the rest, I’m helping him to navigate the organisation: the structure, email accounts, hours registration.”

And Hewar’s parents? They returned to Sulaimaniyah in 2013. “It was a difficult decision – I’m an only child. But they weren’t happy here. They are happy in Iraq. My mother is back working for the traffic police, just like she did before we left. My father, who was an appliance technician, now has his own shop. We video call every week.” In late September of 2020, they were able to hug each other in person, at the wedding of Hewar and his new wife. 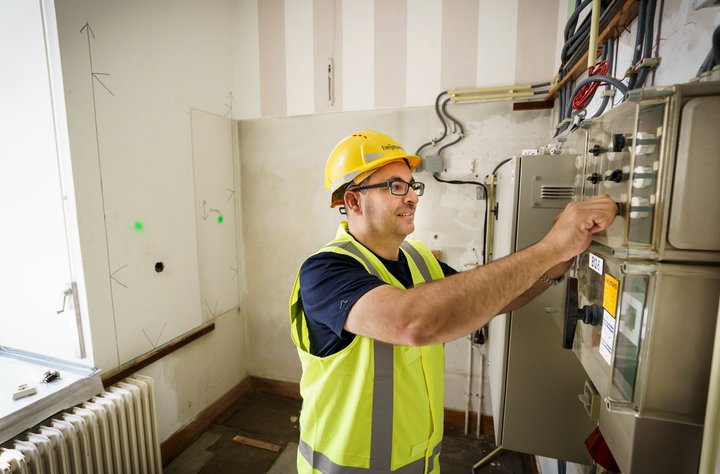 Zaher is happy that the war in Syria seems to be coming to an end. But while he has no problem pronouncing the word verhuisdoos (moving box), he has no plans to return. “My heart remains there, at the Qasioun mountain, where we frequently enjoyed the views across Damascus in the evenings. But my future is here, in the Netherlands.”

In 2015, he met his future wife. They now live with their two young children in Rotterdam-Zuid. Not exactly a trouble free part of the city, but that doesn’t bother Zaher. “In the Netherlands, we are safe. And really, that is the most important thing.” At any rate, he loves Rotterdam: “A beautiful city, with 165 nationalities, lots of work. And Feyenoord, heh?”