They are open, the first two tubes of the longest Dutch land tunnel: the Gaasperdammer tunnel. The other tunnel tubes will follow later this year. Prior to the opening, project manager Robin Bruil and advisory consultant Twan Daverveld look back at the complex building project, which was mainly a logistic challenge.

Let’s start with the figures, because those are impressive. Five tunnel tubes, five lanes in each direction and an alternating lane. In and around the tunnel there are, amongst others, 140 ventilators, 5,500 light boxes with led lighting, 360 cameras and 366 emergency cabinets. The tunnel comprises a total of 15,000 different components. In 2017, more than 1,300 people were working on the project.

“Our project is big in every respect and that’s what makes this job so special”, Twan Daverveld says proudly. Since the beginning of 2014, he has been working as an advisor for building combination IXAS, a consortium consisting of Heijmans, Ballast Nedam, Fluor and 3i. “During the preparatory phase, I focused on the design process and the integrated collaboration within the consortium. Throughout the execution, I was responsible for all communication between IXAS and the operational stakeholders, such as the safety officer, tunnel operator and the traffic centre of Rijkswaterstaat (the Dutch Department of Public Works and Water Management).”

Key piece of the puzzle

Construction of the Gaasperdammer tunnel is part of the road expansion Schiphol-Amsterdam-Almere (SAA). This project is key to keep the area between Amsterdam and Almere easily accessible. Twan: “IXAS is responsible for the sub project ‘road expansion A9 Holendrecht – Diemen’, in which the tunnel is de key piece of the puzzle. IXAS was granted the project in September 2014, a year after that we started the construction.”

“The fact that we are building in an urban area, makes it a complex puzzle”, Robin adds. “The tunnel is located exactly at the interface of the Amsterdam neighbourhoods Bijlmermeer and Gaasperdam.” As a project manager Robin is responsible for all the technical installations in and around the tunnel. He has been working for IXAS since 2015. “Space for construction was limited. The building site was located right in the middle of a residential area. And we had agreed with the principal Rijkswaterstaat that we wouldn’t use the main and surrounding road network for construction traffic.” 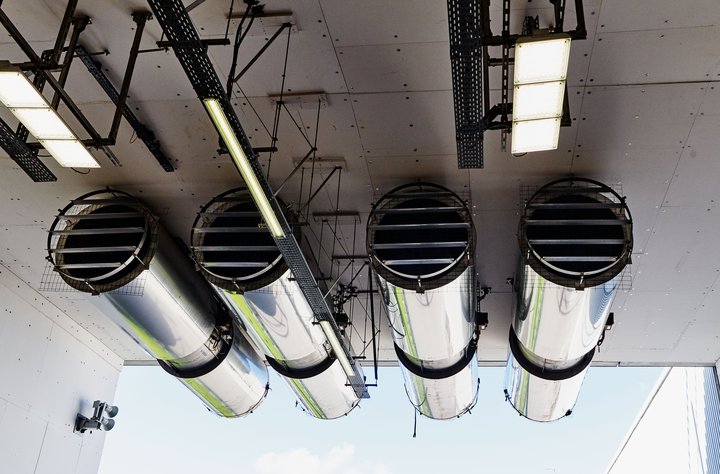 The first hurdle was making room for the tunnel and construction roads. “The phasing consisted of 3 parts. Various rail and metro viaducts have been extended and a total of fourteen temporary bridges have been installed for crossing cars and bicycles”, Robin continues. “The A9 has been expanded. On the northern side sheet piles have been installed and part of the former A9 has been excavated where the tunnel is currently located. And lastly, the alternating lane has been laid. It was originally built to create extra capacity for the A9. However, due to many complaints by local residents, it ended up being used as a construction road. This way we didn’t have to work nights anymore and we could limit any disturbance.”

At the beginning, IXAS had a large design team and a small logistic department. Looking back, Twan believes logistics should have been more of a priority. “This was a learning curve. During the first couple of months, we encountered several logistic problems. For instance, is was hard to get the means and people in the right place at the right time, especially during the construction of the actual tunnel.”

A tunnel tube consists of sixty pieces, also called segments, each fifty metres long. So, segments are pieces of tunnel, which when connected make up the entire tunnel. We planned to build each segment according to a fixed pattern, in six ‘trains’. “We call it a construction flow. It consists of different teams of specialists”, Twan explains. “The foundation crew went up front. Followed by the crews that made the tunnel foundation blocks, floors and road foundation. After which, those responsible for the tunnel walls and tunnel roof completed the job. Next, the complete construction train moved on to the next station, or in other words, the next tunnel segment. These little trains had to pass through several stations on a daily basis in order to stick to the planning.”

It seemed like a good plan on paper, but in reality, the little trains often got in each other’s way. “We had no other choice than to split up the construction flows, which resulted in work not being completed in time at certain stations. At one point, there weren’t six, but dozens of trains driving around the project”, Robin says.

Twan was relieved to see that everyone dealt well with these kinds of setbacks. “No one let their head down. There is an extremely strong feeling of togetherness on this project. Here you are working for IXAS, so, for the moment, not for Heijmans, Ballast Nedam or Fluor. To emphasize that feeling of unity, every person in charge wears clothing with the IXAS-logo. At first, people found it nonsense to wear the same helmet and orange work clothing. Though, now we don’t know any different.”

A digital piece of art

By the end of 2017, the logistics were running smoothly. Robin: “For example, the people from tunnel technical installations (TTI) were working simultaneously with their engineering colleagues. Their motto was that the last ventilators should be up, before the concrete had hardened. And that’s what they managed to do. I hadn’t seen that level of collaboration before.”

To further optimize the construction process, IXAS came up with various smart solutions. For instance, moving company Saan helped to install 1,400 system cabinets in the mid tunnel duct. The space between two tunnel tubes serves as an escape route and the location for cables and pipes leading up to the technical installations. “Our own people were able to install four cabinets per day, while Saan managed to put up 250 cabinets in one night,” Twan explains. “The difference was that our people also connected the cabinets. By splitting up these works, we were able to work far more efficiently.”

The manner in which all entrance passes for construction site workers were issued was also quite innovative: IXAS was one of the first construction combinations that fully digitized this process.”

On 25 June 2018, the tunnel was officially delivered to Rijkswaterstaat. The tunnel had been completed by then. Still, IXAS knew an issue regarding fire safety was coming its way. Robin: “Research showed that – in case of a very large fire – the concrete that had been required by the principal – might be less fire resistant. When that came out, Rijkswaterstaat ordered us to apply heat-resistant materials on the ceiling and walls. In order to do so, we had to remove all the tunnel’s technical installations, a logistic challenge which we hadn’t planned for. Each part was given a unique barcode number and was scanned and saved in a warehouse.”

A total of 300,000 square metres of heat-resistant plates have been placed over the full length and in all tunnel tubes. This can be compared to three times the size of the Malieveld area in the Hague. “Afterwards, we could re-install all the equipment in the tunnel and we started testing for the second time”, Twan says. “We successfully completed the final test at the end of May 2020. It wasn’t an option to open up the tunnel straightaway. We hadn’t been able to finalize the preparations due to corona.”

Rijkswaterstaat and IXAS had agreed that the building combination was going to be responsible for the maintenance of the tunnel and motorway for the next twenty years. Twan: “This means IXAS also pays the tunnel’s energy bill. Reflective asphalt and led lighting result in a significant energy saving. The tiny white stones in the road surface cause a better reflection of light. Because of this, less lamps are needed, resulting in a lighter energy system. An additional advantage is that the lamps don’t have shine as bright, which leads to an energy saving of twenty percent.”

IXAS is using 5,500 panels to build a solar park on the roof of the tunnel. “We feed the generated power back to the network, as the tunnel can’t depend on solar power”, Robin says. “The earnings will be offset against the usage costs. And if you generate more than you use, you will make money. “IXAS has started laying a park on the tunnel roof and started demolishing the former A9”, Twan adds.

“By the end of this year, a total of four tubes will be opened for traffic. The fifth will open once the consecutive project, the expansion of the A9 Badhoeverdorp – Holendrecht, has been completed. I hope that road users travelling through the tunnel will experience some of the pride we felt when making the Gaasperdammer tunnel.”