Imagine you have just finished celebrating the highest point, and then your client wins the Eurovision Song Contest contract! Senior site managers Bart Abels and Henri Verbruggen are building a place where tens of thousands of international guests will gather May next year. Still, they won’t freak out about it: “We continue to work according to planning.”

Are the Duncan Laurence posters already up in the site cabin? Because it is thanks to this singer from Hellevoetsluis that the 65th edition of the worlds’ most renowned song festival is once again taking place in the Netherlands – for the first time since forty years. And of course this will be in Ahoy. Managing Director Jolanda Jansen declared with great pride that they will “organise a spectacular and memorable edition, one that the region, province and whole of the Netherlands will be proud of”.

This must cause extra tension within the Hart van Zuid combination, in particular the builders working on the Rotterdam Ahoy Convention Centre? “Nothing changes for us, we just continue to work according to the agreed planning”, the two senior site managers say calmly.

They may sound matter-of-fact, but Henri Verbruggen and Bart Abels are extremely happy for their partners: an event like the Eurovision Song Contest does not come along often. “Of course it’s great”, Henri says. “We’ve been working together for such a long time now; we have obviously built a good relationship.” Will they be invited to attend the Eurovision Song Contest? “We don’t know yet, though it’s not something we necessarily want. We already go to work singing every day.”

That has actually always been the case, as their loyalty to Heijmans shows. Bart and Henri know each other from projects like TivoliVredenburg in Utrecht and Lounge 2 at Schiphol. They both started off as mechanics at Heijmans. Henri has been with the company for over twenty years now, and Bart for 26 years.

Within Hart van Zuid, they have been working on the expansion of Ahoy, including the Rotterdam Ahoy Convention Centre (RACC) and RTM Stage. Soon this complex will feature 35 halls, the largest auditorium and the largest theatre hall of the Netherlands, RTM Stage. There will 2,750 seats and when those are removed, a concert hall with enough room for 7,000 visitors. The building will be delivered in September 2020. The festive opening will take place in January 2021, when the Ahoy celebrates its 50th anniversary.

“We call ourselves the three musketeers”, Bart says laughing. “Henri, Gerrit van Mook of Ballast Nedam and I apply an integrated approach while managing the execution of the new-build from this site cabin. As senior site managers, we are responsible for both the electrotechnical and mechanical installations and the construction activities. All those disciplines. If something is amiss, we are able to act faster.”

The tour takes us along the ridge of RTM Stage, through wide galleries up to the roof, which is currently being closed. Henri: “Once the building is wind and water proof, we will start the finishing phase. Pouring floors, placing dividing walls and, finally, installing the ceiling.” Pointing at the Rotterdam skyline, he adds: “As a site manager you see what you are building, that’s the joy of our trade.”

We have banished shadow wherever possible. All homes overlook the park and green inner courtyards, as well as the surrounding buildings of both the shopping centre and the farm across from here. And it is in the green areas that you meet one and other, in the communal courtyards, adjacent to the private outdoor areas. The Flux agency adds ecological value to all of this: insects, birds, butterflies and small animals get their own habitat in Greenville.”

Those elements that soon will be hidden behind walls and ceilings, are currently still visible. One floor is packed with shiny metal cabinets, another floor is covered with floor heating tubes. Bart proudly points at the largest air treatment cabinet: “Six metres long, 4.8 metres wide and five metres high. That’s something you don’t pay attention to as a visitor and you shouldn’t have to either. You should feel comfortable, without you seeing or hearing the equipment.”

Other floors display the outlines of the new expo foyer, which includes a magnificent view of the South of Rotterdam. Bart points out the 35 break out rooms on the drawing. “These meeting rooms can accommodate anywhere from fifty up to a thousand people. They can be divided in various ways, using sliding walls.”

The floor and a twinkling ceiling full of lights in the new entrance give a sneak preview of the RACC. “The new building doesn’t just look good, it will also make visitors feel comfortable”. How will they make that happen? They pull out their specially prepared lists:

During construction all the pieces that ensure “good acoustics” fall into place. This is of great importance to an end user like Ahoy, as they want to organise various sorts of events simultaneously, Henri explains. If the North Sea Jazz Festival takes place at the same time as an exhibition or congress, the sound of the bass shouldn’t resonate. “We have designed everything in such a way that all areas have been ‘acoustically disconnected’. Nothing interacts”, Henri explains. “Cable and air ducts have been cut off to prevent vibrations spilling over to the next room. On top of that, the air ducts contain mufflers.”

The municipality of Rotterdam might be the client in the Hart van Zuid project, Ahoy sure plays an important role. Bart: “You are wandering around in their home, so their event planning is key. The deadlines for the renovation phase of the existing halls were cast in concrete, as the artists were, so to speak, waiting for a heads up to enter the hall. We are continuously in touch with all stakeholders to ensure we are all up to speed about each other’s agenda.” 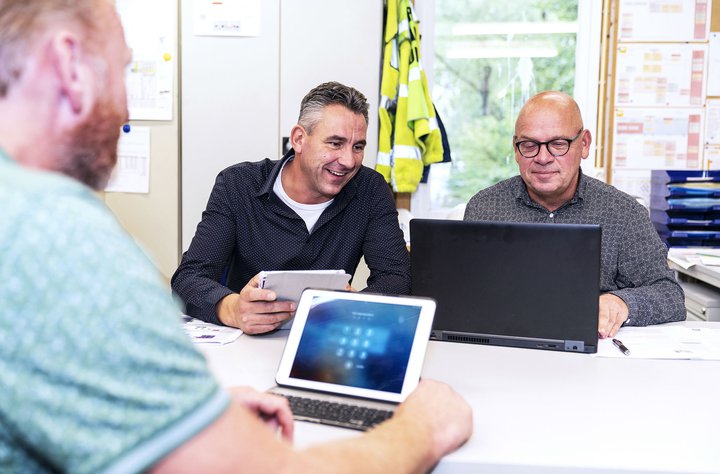 Henri explains how they organize the building site logistics to limit any nuisance to visitors of Ahoy. “And should Ahoy employees welcome an important customer, we will adjust the planning of any drilling work. As many events take place at night, we don’t cause much disturbance to one and other, though our teams also work on Saturdays. That’s why it’s crucial to coordinate matters.” Which, of course, will also be the case during the Eurovision Song Contest.

Bart stresses the importance of daily meetings: “Every morning at 6:30AM, all the site managers sit down for, what we call, our ‘morning prayer’. Every field is represented, E, W and construction, to briefly discuss what’s going on with each expertise.”

Time for a snack

Up to now, the collaboration has been a smooth ride. Henri and Bart see that both the municipality and Ahoy are “very satisfied”. How can they tell? Bart: “Ahoy frequently treats the whole crew to ‘kroketten’ and sausage rolls. They wouldn’t do that if they weren’t happy. The men on the building site really appreciate such gestures. Especially now Winter is at hand.”

A good atmosphere is always very important here ‘on South’. “Of course, there’s work to be done, but enjoying what you do is just as important”, says Henry. “We maintain close contact with our colleagues who are working on the nearby Kunstenpand. Before this project, I used to work with that crew on the swimming pool and we often had a cup of coffee together. Now that we have more and more to do here, we have less time to meet up. Though, today it’s the site manager’s Birthday, so I will drop by to congratulate him.”

ALL PROJECTS OF HART VAN ZUID TOGETHER

The fact that both men have been working for Heijmans for such a long time, is only natural to them. Henri: “Heijmans creates ‘keimooie’ (meaning ‘wonderful’ in the Brabantian dialect) projects, which are a real challenge for us to make. A standard office building doesn’t appeal to me, but projects like these, hospitals, TivoliVredenburg or Lounge 2, those are works I love to make. I enjoy going to work and that has actually always been the case.”

Henri and Bart keep it this way by ‘making sure we can discuss anything, understanding each other’s work and each other’s issues.” Bart tells that it’s due to the daily stand that everyone knows what’s going on with one and other. “Being transparent isn’t easy for everyone, but we just talk about matters, also if someone has made a mistake. It happens to everyone, how can we help each other out? Don’t hide it, share it, otherwise we can’t solve it together.”

Cookies from ‘Dirk’s supermarket’ liven up the safety toolbox meetings. And there is a team outing once or twice a year. Bart: “Or one of our subcontractors sends over a mobile chips shop. A year ago, there was absolutely no financial leeway for such things. While it means so much to the men on the work floor. Luckily there is once again room for it.”